The public sector has major issues

Regulation today reaches into every aspect of our lives, from paying the gas bill to phoning a friend or using a credit card. Yet despite its achievements, the regulatory state is on the brink of a crisis. The current model of public policy making is no longer right for any government that has set itself the challenge of delivery.

Our society is a mess. The doomsday clock is only minutes from midnight. We need to change. As Einstein said, we can not solve the significant problems we face today with the same thinking that gave rise to them.

The process we have been using is called reductionism. It involves breaking down anything being examined into the parts that make it up. From that we can learn how things work. If you take a mechanical clock to pieces, you can see what each part does and you can find out how it works.

There is no doubt that science has made enormous progress largely by ignoring the complexities of the world and focussing on the simple questions, looking to explain straight-line issues like why apples fall to the ground and why the Sun rises in the east.

Some of the world is like that, otherwise the orbits of the planets could not be predicted; nor could a spacecraft be launched that would land on Mars. Most things, however, can't be investigated in this way. There is much to be learned by dissecting a rat, for example, but in dissecting it, we kill it and cannot know what gives it life. So, by the middle of the twentieth century most of the simple questions had been answered and scientists began to lose their innocence and naiveté about how the world works and turned to more complex questions and these are the stuff of complex adaptive systems and systems thinking.

We now know that most of the world dances to a non-linear tune, that is not easily understood with standard mathematics. Weather is the classic example; so too are nearly all the issues our public sector needs to solve.

There are issues in how our public sector is structured

Despite the fact that scientists have known about this for decades the current public sector is basically straight-line. Just think about the way we have traditionally organised public sector work in bureaucracies or silos.

I have used Child,Youth and Family as an example, not because It's a problem agency, indeed I suspect CYF is better than most agencies at working as part of a wider system; rather it is because I have been working in this area for some time. If we were drawing them it would look like: 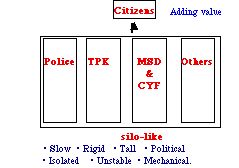 For example when we provide social development to citizens, we organise the various organisations involved (Police, Te Puni Kokiri, Ministry of Social Development, and lots of others) in silos that are poor at talking together and at considering the individual and asking the simple question: "How can we together help this citizen?". Rather they all push their own programs with little respect or understanding of what the others are doing.

There are three main problems with being siloed: 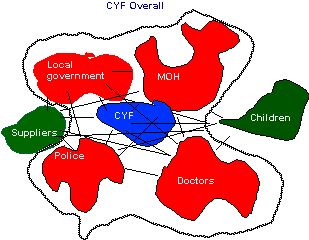 The alternative is government based on systems thinking, a better model for change in complex systems such as the public sector.

This living system includes many publicly and privately owned organisations that are all broadly working towards a similar end, to protect the country's children and make stronger families. Each part of this network is connected to the other parts (or should be), and each part depends on the other parts for its success.

This is CYF's primary system, its primary focus and the components as its strongest P.A.L.s (partnerships, alliances and linkages). The work of CYF is to make this system work.

Just imagine the additional value they could add if the Sector was organised like a beanbag!

Beanbag is the name I like to give to organisations formed as complex adaptive systems.

Imagine if the various agencies had porous, flexible walls that allowed information, relationships and other resources to flow between them more freely.

Imagine the structure was more flexible so they fitted exactly to the environment, no matter how much it changed; rather than the thick, impervious, solid walls of silo-like organisations. 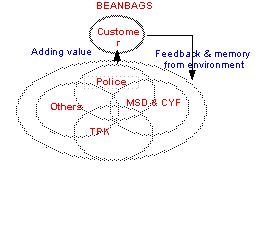 Imagine the individuals inside were free to move far more easily to add the most value to customers no matter how much the environment changed; rather than being fixed in jobs and silos of power.

Imagine if public sector managers stopped competing and started cooperating with each other across the Sector; or even within the organisation. In this regard beanbags apply within each Agency also, with all discipline (Operations, Information and Support, Innovation and Customer service) working with cooperation, openness, feedback and memory.

Imagine if the Sector had fast, regular feedback that told it whether or not it was getting closer to its objectives or further away.

Imagine if the Sector memory was powerful and reliable so everyone learned from the practice of everyone else and built on this.

Imagine if, instead of inventing new policies for every new problem, our public sector managers went out and identified things that were already working well in the system and gave these exposure and resources to amplify them.

Imagine if our public sector managers understood that close to chaos small changes can lead to almost unbelievably big results. And, like the broken windows in New York, they went out searching for these small things and made them happen.

Imagine if our public sector managers learned how to use Agency-Based Modelling, and as a result were able to identify the simple decision rules that are pushing some sectors of the population into crime, drugs and poverty; then did something about changing the rules.

Finally, imagine if our politicians believed they were custodians of a living system, rather than an economic machine. They would stop selling off businesses or buying them back; they would stop the endless cycle of centralising and decentralising; they would stop structuring and restructuring; tinkering backwards and forwards with the detailed mechanics every time a government changed. Rather they would start preparing the soil for the citizens to plant and grow in the best overall conditions. They would allow the system to move naturally towards its "sweet-spot" that can only be interfered with by over-management.

"Some people say I'm a dreamer.
But I'm not the only one."
Imagine. John Lennon

There are issues in how our public sector thinks

Most of the important problems today were born from reductionist thinking and this is how we are still trying to solve them. For example we are fighting terrorism, criminality, cultural conflict, environmental degradation, ill-health, even obesity and poverty with the same thinking that created them.

Just take a couple of these issues:

To solve the big issues, we need to stand back and look at the whole system to understand how things work, rather than break it into pieces. Looking at the whole is the essence of systems thinking. 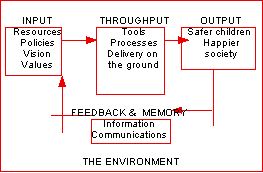 There are three main problems:

The Public manager's role needs to become more facilitative; facilitating associations of citizens and other social organisations in order to produce social goods and services. This role is not so much as a problem solver, as a partner towards solution making.

Public sector managers should think of themselves as a "switch". A switch between various parties who need to be part of the solution, bringing them together and facilitating them to work together more effectively and with better information. They need to become managers of information and relationships.

While this way of working sounds unfamiliar to most public managers, with a better understanding of how systems work, they are able to trust that new pathways to solutions will emerge.

It's important to realise that I am not promoting systems thinking as an all-encompassing theory, taking over from straight-line approaches. Even Prigogine (who won a Nobel Prize for work in this area) insists that linear science and its models are not discredited by systems thinking; in conditions of great stability and for short time periods, linear approaches work well enough. The only trouble is, stability and short time periods are not the norm, especially today.