For years, Chief Executives have pulled their hair out in frustration at the lack of cooperation between Finance and Sales. Sales people want to grow market share and give better deals to their clients. Finance argue that its profit not market share that matters. Neither seem to listen to each other nor understand. At best they misunderstand each other, at worst they hate each other. It leads to separation and silos.

Similar disagreements exist between Product Development and Production. Development people dream up neat ideas that Production people say are impracticable or can't be made.

People are as different as the colours of the rainbow 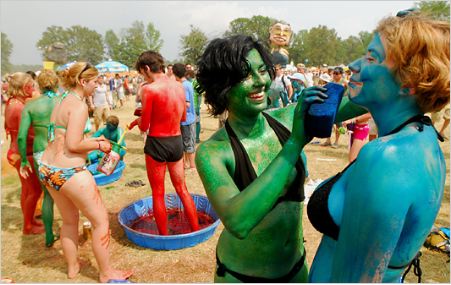 These are not just simple problems nor matters of bloody mindedness. And they are important because the customer suffers from this internal warfare.

These problems occur because the people in one occupation think in a fundamentally different way from the people in the other occupation. At some deep they feel fear of these differences and try to isolate themselves from it. Silos and mistrust result.

Four species of people live on this Earth. When you get to know about this it is as though each species has its own colour. One species is blue, another is green, a third is red and the last is yellow. There are roughly the same number of people in each colour.

Extensive research by Herrmann International shows that people diagonally opposite each other on the diagram to the left are likely to think in diametrically different ways. For example, things that blue people value are not valued by red people, and vice versa. Also, things that green people value are things that yellow people often despise.

How to get understanding and cooperation

So how does one overcome these problems and get these different groups working together?

Herrmann's Thinking Preferences measures these differences and brings the issue out into the open where it can be discussed and understood. This breaks down the fear of difference and reduces the desire to be separate. Indeed, the beautiful thing about Herrmann is that it brings people together because opposites start to understand that they need each other to be successful.

For example, blue people understand that to be more successful, they are far better to put their energies into becoming even more blue, as long as they build really strong partnerships with red people on the opposite side of the chart. In other words, Accountants realise that their best strategy for self development is to become even more blue as long as they make relationships with red people like Salespeople. Production people realise that their best strategy is to become even more green as long as they form relationships with yellow people like Product Development, who are strong where they are weak. As a result people who used to be agonists become collaborative. Where there used to be misunderstandings, suspicion and doubt, we end up with cooperation, trust and understanding.

It happens in all industries - eg Health 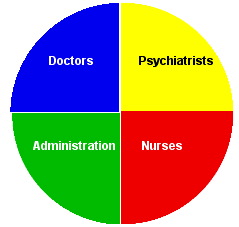 This issue has applications in nearly every industry. I have done quite a lot of work in the Health industry. Imagine the problems that exist between doctors and nurses on the one hand and administrative people and psychiatrists on the other. This is shown in the chart on the left.

Sorting out these problems is surprisingly easy and cheap, yet many managers put up with silos, slowness and internal warfare, thinking it's just part of human nature. Nearly all people want to cooperate and work in a friendly environment. If they don't it's because they have not been shown how understand and value people who are different from themselves.

Give me a call if I can help. In the meantime: Think BIG!

Liberating the human spirit at work