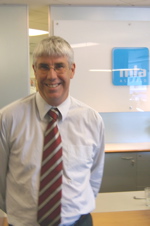 Stephen Matthews is the CEO of the Motor Trade Association. I have known and respected Stephen's leadership skills for several years. In part this has come from personal observation and also from comments made by his staff. I have also had reason to work with several other groups of people in the motor industry and every one has made positive comments about Stephen and his contribution to the organisation and industry. Like me they comment most frequently on Stephen's ability with strategy and people.

Stephen describes himself as a "macro guy". He says: "I'm on planet Earth only once, so this is my one and only shot to do it well and leave a legacy of value behind". He says: "If you have a clear vision of where you want to go, you can achieve anything. But you need a system to put the vision in place."

"Once the vision is clear, as long as we have good templates and business plans, I generally let my managers get on with it." The first step is to build a strategic plan. "It's like the jigsaw puzzle, if you get the border pieces in first, people can see how they fit within the whole more easily." For Stephen, planning is more important than the plan. It's the process rather than the final product that matters most. He prefers a ground-up approach. Recently he took the whole of MTA away (50 staff) to work on the vision. "It's often the guy down the back who has not said much who will contribute significantly. It's important not to stifle them."

Stephen calls himself "a gentle soul who cares a lot and thinks a lot". He thinks that values as central to leadership: "If you don't have values, others will impose their values on you." Stephen said his values come from his parents and grandparents who taught him to believe in himself, respect other people and trust them, at least until they let him down.

This respect for other people seems to be central to Stephen's success. It's demonstrated in many ways to staff, customers and suppliers. As a supplier of services to MTA, I know, it is one of the few organisations that regularly invite me to their celebrations such as product launches or give me gifts at Christmas time. When I said how much these things are appreciated, Stephen says, "It cuts both ways, we care about suppliers and they care more about us beyond merely being paid". When it comes to staff, this respect is shown by little, but important things like involving people from the grass-roots in high-level projects, like sending personal birthday cards, and like personally interviewing every member of MTA each year about what they want to achieve whether it inside or outside of MTA. Its what he calls "An open book conversation".

Stephen believes in open, transparent communications: "I'll tell anybody just about anything even personal stuff!". MTA publishes the monthly accounts on the staff notice board.

Stephen describes himself as an optimist. He says: "Pessimists see a challenge in every opportunity. Optimists see an opportunity in every challenge." Stephen says this attitude can't be taught, it's something we're born with. "All our problems in MTA are good problems." he says.

Stephen does not like too much bureaucracy or politics. On several occasions he mentioned the importance of 'breaking down the silos'. As he said: "I don't like heaps of manuals. If I employ good people they don't need too many guidelines." His preferred approach is to pick good people and load them up, more than they are comfortable with. "I prefer to get 90 percent of 200% than 100 percent of 100%." he said." He prefers decision making to be mostly consensus-based and finds he seldom has to resort to being hierarchical. On politics he says: "Politics is the most destructive element in any organisation, so if I can reduce the politics there is a better chance that people will channel their energies into a more positive things."

As an external consultant I have developed a highly tuned antenna for the health of organisations. In some, the lack of meaning, contribution and connection, is like a lead weight. In others, like the MTA, there is a lightness, an energy that comes from contribution and a connection that's a joy to work with. It's my hunch, that in MTA, this energy is largely due to Stephen Matthews.