How to Revitalise Large Mature Organisations

It's Not Quick or Easy. But the Payoffs are High.

I know from many conversations with Chief Executives and Directors that silos and slowness are two of their biggest frustrations. It's silos and slowness that obstruct their progress, reduce their achievements and keep them from success.

Silos and slowness lead to anger and frustration, not only at the top, but also right through the organisation. Yet many organisations seem to be powerless to break out. Let me know if you have any insights into this issue or if you need help.

From silos and slowness to innovation and energy

The purpose of this paper is to demonstrate that while the process to free up innovation is not easy it can be achieved. There are a number of frames that need to be examined, aligned and changed. I have listed a few of these below.

The idea that new ways of working are becoming vitally important has been captured by Daniel H Pink in his book: "A Whole New Mind". Pink argues that the past belonged to left-brained types but the future belongs to right- brained types, as six aptitudes will become more important in the future. These are: 1. Design, 2. Story, 3. Symphony, 4. Empathy, 5. Play and 6. Meaning.

Several forces are tilting the scales in favour of right-brain innovative approaches. Pink argues that abundance has satisfied, even over satisfied, the material needs of millions, boosting the significance of beauty and emotion, and accelerating individuals' search for meaning. For businesses, it's no longer enough to create a product that's reasonably priced and adequately functional. It must also be beautiful, unique and meaningful. Also we must perform work that overseas knowledge workers can't do cheaper; that computers can't do faster; and that satisfies the aesthetic, emotional and spiritual demands of a prosperous time. To revitalise large mature organisations managers need to change their basic assumptions about how work should be done. Large mature organisations think in terms of static jobs and tasks (putting people in boxes). They assume the future is knowable so they strive for facts and clarity and content. Their operating model is a machine that can be controlled like science.

Revitalised organisations think in terms of how to create an environment where work is done (putting people close to the action). They assume the future is largely unknowable so they strive to make the organisation flexible enough to cope with what ever comes. Their operating model is a living system that needs to be influenced and nurtured like a living being.

Instead of people staying in jobs, doing the same task over an extended period of time revitalisation demands people work with far more ambiguity in fluid positions where perception is as important as facts. In revitalised organisations emergence is at least as important as deliberate planning.

The US army was asked to manage a playground for a day. They were given a week to prepare. They undertook a rational assessment including a psychometric assessment of the children's capabilities. They actually planned the play and deployed the activities according to a preconceived plan. The result was total chaos. Then they observed what experienced teachers did, which was to let the children play for a while until patterns emerged. Then they reinforced the patterns they wanted and dampened down the patterns they did not want. For more on ways of working... 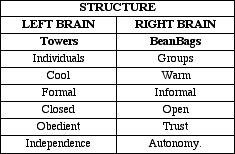 In my words, we need to move from "Towers" to "Beanbags". Beanbags have porous, flexible walls; rather than the thick, impervious, solid walls of Tower-like organisations. Unlike Towers which are slow to move, Beanbags are fast because people move to be close to their environment no matter how much it changes. Beanbags are open and informal, the individuals are free to move far more easily from group to group where they can add the most value to customers; unlike Towers where individuals are fixed in jobs and silos of power.

Beanbag managers focus on creating a workplace of trust and connectedness where human energy is released and people grow. For more on structure...

Large mature organisations tend to under-estimate the importance of connection. All human beings possess a desire to connect with other people. Sometimes it is motivated by the desire for love, but it can also be prompted by feelings of loneliness, the need for acceptance, the quest for fulfilment or the the desire to achieve in business. Revitalised organisations work hard to connect people and constantly remind them of the importance of their relationships and networks.

This reminds me of a medieval Jewish story where God spoke to a Rabbi about heaven and hell. "I will show you hell," God said. They went into a room a delicious smell coming from a large pot of stew in the middle. Around the pot sat people who were famished and desperate. They were all holding spoons with very long handles which reached to the pot, but, because the handles were longer than their arms, it was impossible for them to get the stew back into their mouths. "Now I will show you heaven," God said. They went into an identical room. There was a similar pot of stew, the smell was just as delicious, and the people had the identical spoons, but this time they were all well-nourished and happy. "It's simple," God said. "You see, they have learned to feed one another."

Revitalised organisations know that all thinking preferences are necessary; they therefore measure the thinking they have and work to fill any gaps to being "whole brain". When they need to solve grunty problems they work hard to put together whole brain teams of people who understand and value each other's differences and strengths. 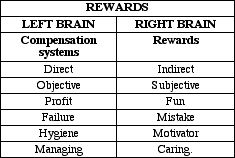 In large mature organisations reward systems are often predicated on Skinnerian behaviourism (i.e., the stimulus-response regime that caused Pavlov's dogs to perform amusing antics) which holds that people will act in accordance with the 'trainers' desires so long as the right rewards are offered. Yet in the 1950's Fredrick Herzberg showed that most rewards were 'dissatisfiers'. Significantly anyone offered anything less than the maximum, or who compare their reward unfavourably with less deserving peers, usually focus on the gap and end up experiencing the reward as a negative reinforcement. People are hard-wired to look for gaps, what's missing, what's wrong. The point is, not to disregard rewards altogether but to recognise that they are imperfect.

Revitalised organisations have a wider approach to rewards; they know that subjective, indirect rewards are often more motivating. In my experience rewards that touch the soul are the most motivating of all. Show someone how their work has meaning greater than themselves and you have magic. 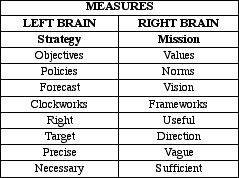 I don't claim to be an expert on measurement (in this matter I defer to my colleague David Parmenter), however it seems to me that the speed of change in the external environment has made traditional 'historical' conventions of accounting far less relevant and forward looking measures (mission, vision and directions) more relevant.

To revitalise a large mature organisation, I believe left AND right brain thinking are necessary. In practice this means most organisations will need to develop the skills shown in the right hand side of the 6 charts above. Study them, and if you need any help phone me on Phone +6421620456 or Skype Bruce.Holland.

I really believe there is a better way of making work happen - It's mostly about breaking down silos and creating more depth, connection and meaning.