HAS THE PUBLIC SECTOR TAKEN A WRONG TRACK?

Before the 1980s, we thought of the public sector as the ‘civil service’ run by ‘civil servants.’ There is no doubt that it was somewhat inefficient. We all recognised the humour in Roger Hall’s play “Gliding On”, and it needed to be fixed.

I think the reforms of the 1980s fell short in two ways:

They reduced our ability to solve important (wicked) problems The efficiency improvements may not have been as high as claimed after hidden costs are taken into account.

Ironically we were closer to the right track before the reforms of the 1980s that attempted to make the public sector more efficient but reduced its capacity to solve ‘wicked problems’. Let me explain.

Society has some really important issues crying out for solution. Many of these issues are wicked problems that are both technically difficult and there is no real consensus about how to fix them (see Chart 1 below). 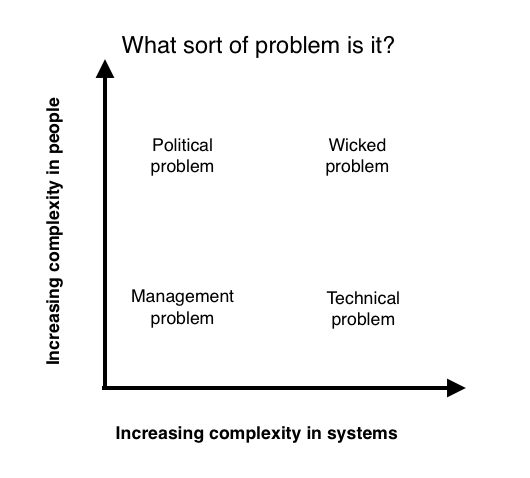 Examples of wicked problems include improving the health and well-being of our least privileged, reducing our footprint on the planet, creating a more equal society, better education and better use of our ageing population.

Only the civil service was set up to take the long-term, strategic and systemic views needed to solve wicked problems. Unfortunately, since the reforms the civil service has been forced to operate largely in the managerial (bottom-left) quadrant of Chart 1, diagonally opposite where it is able to add most value.

Chart 2 is another way of looking at what has happened since the reforms. The civil service has been pushed from its position (top-right Chart 2) down to the bottom-left. In other words the reforms have set the public sector up to fail. It's not the fault of the agencies or the people. Each agency is full of well-intention people, working hard, trying to deliver their Outcomes, but the system now works against them. 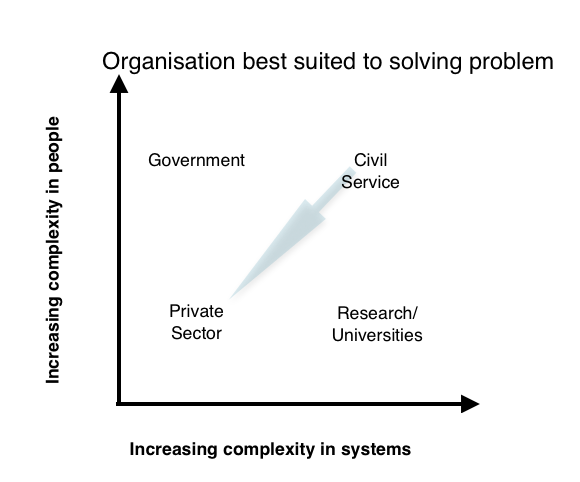 The civil service used to work to fix wicked problems, today it is organised more like the private sector that is largely responsible for these problems.

Assumptions of the reforms

The reforms were driven by several unspoken assumptions about how the public sector should be run including:

Until 1992, I accepted these assumptions. All of my experience was in the private sector and nearly everyone I knew thought the same.

Today, I dispute all of these. After 22 years consulting in most of the large public sector organisations I now know that:

Position before the reforms

Before the reforms the civil service took a long-term view on the things that really mattered to New Zealand (see Table 1 below):

Position after the reforms

Since the reforms (see Table 2 below) the public sector has lost some of its wider focus on what is best for New Zealand and its ability to solve wicked problems. The civil service has been asked to become more ‘competitive.’ Ministers and government have become more ’hands-on’ and Chief Executives have narrowed their focus to not making mistakes and not surprising the Minister. Efficiency has been tackled by shortening the horizon, focusing on the agreed Outputs and living within this year’s budget.

As a result, commitment on both sides has reduced. Some job security has been replaced by short-term contracts and many ‘acting’ roles. Some pride in a life-long career has turned into a feeling of being a burden on society. Some trust has turned into fear and self-interest.

The private sector has a reputation for being highly efficient; however, when you dig beneath the surface, it is less efficient; because, it does not take into account many hidden costs. These include the hidden costs of business on climate change, water quality, species extinctions and resource availability. Hidden costs include the way business distributes wealth (according to Oxfam Research, the richest 1% of people own as much as the other 99%). Hidden costs include the way business is consuming the planet’s resources (according to Richard Heinberg in “The End of Growth”, we are currently consuming resources as though we had 1.4 planets available to us). Hidden costs include drunkenness, overeating, drugs, and many other things that are done in the name of commerce. If these hidden costs are accounted for, the private sector’s reputation for efficiency would not be as good.

The economy needs another reform of the public sector; one without the inefficiencies of the past, but with many of the other characteristics of the old civil service reinstated; especially a wider focus on the public benefit of what is best for New Zealand; a longer-term focus way beyond the election cycle; more collaboration between agencies (not super Ministries); and managers who know more about how to make a difference to New Zealand than just how to run an organisation.

Also, the public sector would benefit from more job security, more capacity to think long-term, strategically and systemically, and more investment in its people.

These are my personal views and do not necessarily reflect those of others in Virtual Group. I have deliberately exaggerated the situation to make a point. I know there are many exceptions to my generalisations. I don’t pretend that it is a fully worked solution, indeed it needs much more development. My issue is that I had no mandate to produce this paper, let alone a mandate to polish it into something that is more developed. With these qualifications, I stand by the general thrust of the paper.

I know that change happens in strange ways, especially when a system is under some pressure; small initiatives can lead to large results. The reforms of the 1980s happened quickly because the system was under pressure and a new government told a different story. I hope this paper is part of the impetus forward and the start of a better story.

To make a difference, stories have to be shared, so if you think this paper has any merit, please pass it on to others who may be interested.