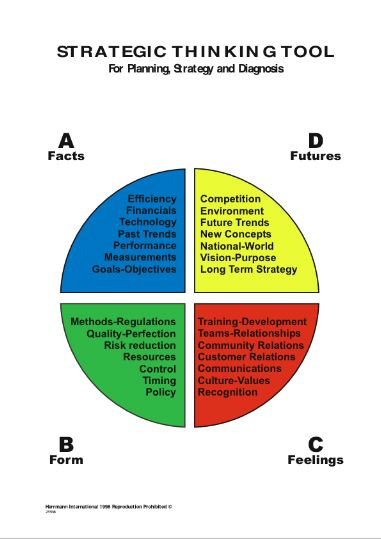 There are two reasons for this

Firstly, Western business is dominated by men. A major study by Kevin Ho, undertaken as part of his doctoral dissertation clearly shows that women are significantly more right brained than men. It would seem that women really are from Venus.

The study is reported in Ned Herrmann's book "The Creative Brain"; it was of 7989 individuals, approximately one third of whom were women. Ho was careful not to have any bias due to qualifications or occupations. The second chart shows the Herrmann thinking preferences for men (see the blue line) and women (see the red line). 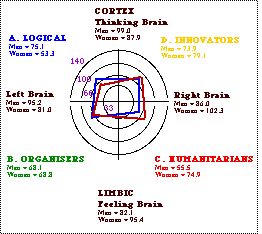 Quadrant D is a measure of creativity and in Ho's study women scored an average of 79.1 compared with men at 73.9.

Quadrant C is a measure of people skills and in Ho's study women scored an average of 74.9 compared with men at 55.5.

When these two right brain sides are combined women have an average right brain score of 102.3 compared with men of 86.0.

The current scientific explanation about the difference between men and women focuses on the fact that men have evolved as the hunters. They had to concentrate on hunting the prey, a risky task that has required them to develop a sense for risk and aggression. While men hunted, the women collected food around the dwellings and organised activities around the home. Unlike the men, they moved between a number of activities. While men executed their task as hunters in silence, the women always had others around to share their joy, sorrow and problems. It is therefore self-explanatory that women could give vent to their emotions and communicate well with others.

The second reason why business is dominated by the left brain is our education system. At school, by the time we are 6 years old most of the creativity has been trained out of us. When children go to school they are like question marks, by the time they leave school they are more like periods ... with all the answers. We need to learn how to look for alternatives, "both/ and" solutions but we are taught mostly analysis and "either/or thinking". In a recent study of American 18 year old students it was found that on average they had completed over 2000 examinations requiring a right or wrong answer.

Want more evidence? Reflect on the early school report of Albert Einstein. "Albert is a very poor student. He is mentally slow, unsociable, and always day dreaming. He is spoiling it for the rest of the class. It would be in the best interest for all if he were to be removed from school at once."

Although I strongly believe in left AND right brain thinking, in practice because of the bias within the environment, I often find myself forced to work in ways that correct this bias. If you'd like to discuss these matters more fully phone on Phone +6421620456 or Skype Bruce.Holland.

Go to the next in the series on creativity...