This is about an experiment that shows that there is something wrong with our business system. Unless the system is changed it can not succeed. We need to change the system in at least three ways.

The first time I started to realise there's something systemically wrong with business was when I came across Barry Oshry's work.

My colleague Warwick Powell had been to a three-day training course in the USA run by Barry Oshry, founder of Power and Systems Inc.

On the first day Warwick turned up with a number of other mainly American senior managers and consultants. They were arbitrarily sorted into three groups: Tops, Middles and Bottoms, and each group was given some rules: 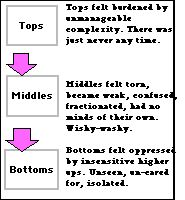 The Tops were able to move anywhere they liked, could talk to anyone they wanted to and could make decisions. Oshry had organised an "in tray" which kept the Tops extremely busy with problems (e.g. a new competitor, poor quality products retuned from a major customer, cost escalation).

The Middles could move between the Tops and the Bottoms, could carry messages backwards and forwards but could not make any significant decisions on their own.

The Bottoms were placed in an area with a rope around it, and they could not move outside the rope. They could talk to the Middles and the Tops but only if they came close enough to the rope. They made no decisions and did what they were told. Sound familiar?

Warwick said that within one day the Tops were feeling overwhelmed and burdened by unmanageable complexity. They just never had enough time. They looked to the Middles for support but didn't get it. They felt a heavy responsibility with the future of so many people in their hands. They set priorities but weren't confident that they were the right priorities. They coped by dividing the work and soon found themselves arguing over 'turf'.

After one day the Middles were feeling torn - they became weak, confused, fractionated, with no minds of their own. They were pulled between the often-conflicting needs of the Tops and the Bottoms. The other groups saw them as loners, confused, wishy-washy. They found it almost impossible to work together - some tended to side with the Tops, others sided with the Bottoms and a few tried to be fair to both sides but quickly burned out in the effort.

By the end of the day, the Bottoms were feeling oppressed by insensitive higher ups. They felt unseen and uncared for, isolated (within their rope) and vulnerable. The Tops seemed to be invisible and if they came by it seemed patronising. They couldn't see the bigger picture or how they contributed to it. They coped by coming together, almost like a union - strength in numbers - and suffered from 'group think'.

Remember, all this happened within one day!!

Warwick said on the second day the groups were mixed up again so that the Tops became Bottoms etc. He said the whole thing repeated itself ... just with different actors.

To find out more, I read Oshry's book "Seeing Systems - unlocking the mysteries of organisational life". Oshry says that patterns like these occur time after time in every workshop. They are completely predictable. So what does it mean?

There are three conclusions I take from this fascinating experiment.

2. The second conclusion, and I think is even more important, is that managers don't see their organisation as a system and certainly not as a living system. And because they don't see it a system they see it as a machine, something that can be downsized, reengineered, restructured almost at whim.

3. Finally the system in the West is significantly biased towards the left-brain. And because they don't value the right brain they are managing in an unbalanced way. The hard, rational model isn't wrong; it just isn't enough. There is something more. And I think as it turns out it's a great deal more - the whole right hand side of the brain. We need to balance our skills in analysis and rational decision making with far more creativity.

In a previous Strategic Snippet I talked about Beanbag management that is at least part of the solution.

Don't forget to read about the wisdom of this month's favourite manager, Stephen Matthews of MTA.