I'm sure you've felt how hard it is to be positive when the people around you are being negative. It is also difficult for managers to pass on feelings of strength and self-worth if they themselves are not feeling strong. Managers who come from a place of strength and self-worth increase their ability to pass these feelings onto their staff a hundred-fold. And this translates directly to the success of the organisation.

Just because you are feeling strong and okay with yourself, don't assume those who report to you are. We have an issue in many of our large mature organisations. According to HBR (March 2006, page 80) only 33% of US managers feel energised by their work, 36% say they feel they are in dead-end jobs and more than 40% report feelings of burnout. In my experience a large percentage of capable mid-career New Zealand managers are also frustrated by their inability to use their skills and do something worthwhile and exciting.

I'm not talking just about Middle Managers, many of the Top Managers I deal with are equally frustrated. They have fought their way to success but what they really want is significance and they seem unable to achieve it. Demographics suggest that this will get worse not better.

I once heard Mark Blumsky say: "It's not the sad people that I worry about. It's all the people they drag down", and he is absolutely right.

No one is small It may sound contradictory, but in 15 years of working with many thousands of employees, from Boards of Directors to people in gumboots and overalls, I have yet to find a "small person". Sure, people feel small and hopeless and unable to take control, but it is always the fault of the organisation. They are stymied in their wish to contribute by organisations that are slow, siloed and small-minded.

It's strange how, when we are inside the silo, we are hardly aware of the restrictions the structure imposes. Like a fish it's the water we swim in. There is some sense of frustration, of being held back as though by spider-webs or thick mud but it's not until we move outside the silo that we realise how limiting it has been.

These people look for work elsewhere and in the meantime compensate by buying services from an economy that is largely devoted to creating distractions. Change the organisation and you change the people.

For more on breaking down silos ...

The change process starts by making the most influential people, nearly always the managers, feel that they themselves are big.; then they are able to pass on these feelings to those they manage.

Although most managers don't act this way, all the research shows that focusing on good behaviours gets more. This is beautifully described in the little book: "How Full Is Your Bucket?" that says we all have a bucket and we all have a dipper. Winners use their dippers to fill other people's buckets because they know that this makes both themselves and the other person stronger.

Most managers don't know who they are, why they are here or how they are really special. I call it their genius. As a result they do the range of things that nearly all managers do; some reasonably well, others fairly poorly. But they seldom do what they were put on this Earth to do. How can they? They don't know what it is. Just imagine the success of a group of managers each using their genius to do what they were created to do, each deeply understanding themselves and each other and working in a collaborative way with trust. This is my dream.

Most people managers don't understand the power of their subconscious or how their body is driven to deliver to the pictures they hold. As a result, often totally unintentionally, they sabotage their pictures by self-talk like: "Im useless" or "I can't remember names", helping achieve exactly what they don't want. It is bad enough that, with these small pictures in their heads their bodies are programmed to deliver small results, but the real problem is what they do to their staff and clients as a result.

Over the last two years, working with the Office of the Auditor General, Prime Minister's Department, ANZ National, The Salvation Army, Ministry of Social Development, Children, Youth and Families, Ministry of Justice, Statistics New Zealand, The Correspondence School and others I have been developing an approach that starts by helping managers see the strengths in themselves. Then they start to see the strengths in each other and in their staff.

I want managers to realise that they don't manage work; they manage the workplace. Their job is to create places where people aren't afraid to be themselves.

Although my approach is marketed as "Irresistible Leadership" its aim has far more to do with making large, mature organisations focussed, fast and flexible, than it has to do with individual development. It really has only three objectives: more depth, connection and meaning.

My mission has always been to liberate the human spirit at work and this is the fundamental issue I have grappled with. Others in Virtual Group are better at the traditional leadership skills like succession planning, coaching and development, 360 degree feedback, performance management, interviewing and organising.

My approach, over a period of four months (time enough for people to change habits) is to let people practice another way. Clients usually choose about 12 modules out of the 60 that are available. Some of it can be fairly scary; it's not comfort zone stuff but people don't learn in the comfort zone. It is not every day that a manager is asked to sit in a big circle and discuss their genius factor with their peers; but what it does is build extraordinary levels of trust and understanding. As people go personally deeper, the connections and meaning develop between them.

For example one of the many exercises managers are asked to complete between modules (there are about 12 half-day modules spread every fortnight over about 4 months) is to "choose again": "Over the period before the next workshop identify an opportunity when you can choose again (to see the positive rather than the negative, to see the connections rather than the separation, or to see love rather than fear) and come to the workshop prepared to discuss what happened as a result."

How to make managers big 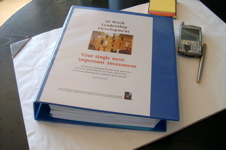 The first 5 modules are usually:

Herrmann is important because it points people towards their strengths and shows them where they can make the biggest contribution. For lots of people this is a revelation. It clearly shows managers that people are different, treat them the same and you will get lukewarm results, treat them special and you'll get magic.

For details on Herrmann's Thinking Preferences ...

2. The Power of the Subconscious Mind

This is important because the picture we hold in our subconscious mind drives our behaviours and success. It shows we will never be more successful than the picture we have of ourselves. This module shows managers how to make their pictures strong through the power of self-talk and how to stop sabotaging themselves. For more on the subconscious.

This is important because managers need to understand the surprisingly simple things that irresistible leaders do that makes such a difference.

A direct link to results

Patrick Lencion in his wonderful book: "Overcoming the Five Dysfunctions of Teams - A field guide" shows their is a direct link between the levels of trust and increased results. Teams that trust one another,engage in open debate, commit to decisions, and hold one another accountable are very likely to set aside their individual needs and agendas and focus almost exclusively on what is best for the team. They do not give in to the temptation to place their departments, career aspirations, or ego-driven status ahead of the collective results that define team success.

There are so many magical moments. In a recent two-day workshop, at dinner after the first day, as everyone was sitting down and waiting for dinner to get started, one of the most senior managers, stood up and declared himself eloquently. People were surprised by his abrupt and out-of-character behaviour and became quiet. "My name is John Cody . I am an Analyst and I am proud of it!" Everyone laughed aloud and gave him a big hand. This was a really big step for John who is not known for taking off his long wearing social-mask and showing his honest and innocent side. Everyone accepted him for who he was and he grew enormously in the eyes of the team. It was a magic moment.

Liberating the human spirit at work

I really believe there is a better way of making work happen - It's mostly about breaking down silos and creating more depth, connection and meaning.