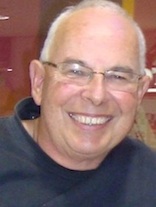 A PROGRAM TO MAKE YOUR CORPORATE SERVICE TEAM STRONGER

"Staff at all levels really enjoyed the practical and participative nature of the conference. They also got insights into themselves and others that will be hugely beneficial in both their working and private lives. They now value and understand their differences rather than trying to hide and conform to the expectations of others. They also realised they are all individually leaders, and this really empowered them, particularly those in the lower paid positions. They are still talking about the experience 2 weeks later. In a nutshell they had fun and at the same time boosted their confidence and self esteem which can only aid customer service and productivity. I thoroughly recommend this leadership program developed by Bruce." Quote from a client GM Corporate Services

The program ran over two days. It was fast-paced and highly interactive throughout. The workshop was carefully set up so everybody was sitting in a big circle. I have a strong preference for circles. The program had many components including fun activities (team games, brain gym etc.), social activities (competitions, dinner and music etc.) and some solid theory (most provided as pre workshop reading) but the essence of the program was made up of nine parts:

1. Understanding ourselves and our customers.

Customer are fundementally different from each other, treat them the same and you'll fail.

We all have some genius but most of us don't know what it is or use it often enough.

The things Corporate Services should focus on are completely different depending on the Value Proposition of the organisation. For example tight systems or loose networks.

Many corporate service departments see themselves in a diminished or inferior way; a tiny fraction of the value they could be to the organisation. Instead of being leaders in the organisation many feel inferior and second rate. Often even senior managers in corporate service departments see themselves in this diminished way. They often talk about being the 'oil in the machine' or the 'glue that holds it together'.

Seldom do I hear them talk about being the 'powerhouse', 'the centre', 'the energy', 'the driver of the organisation'. And yet in many ways they are.

Research shows that today intangible assets account for 95% of the market value of the average organisation. These intangibles are mainly: 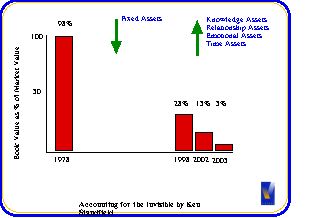 5. Learning from someone else we admire as a leader

Most of us know someone in whose presence we felt cabable of doing stuff we would not normally do. This identifies what that person does to make us feel strong.

6. Identifying when I was a leader

The most important thing about this exercise was the way everyone realised, they'd already been a leader, they'd already made a difference in other parts of their life, and there's no reason why they shouldn't do it more often at work.

7. Agreeing the behaviours we will live from here on

At the end of the conference we identified (from the previous exercises) the six key behaviors that the Corporate Services group agreed they would commit to in future to become far stronger leaders in the organisation; they agreed that as a team they would live these behaviors and challenge those who didn't. What surprised the participants was how quickly the group arrived at these behaviors. The reason for this was because everything that we had done up until then was directed to getting the group into a positive frame of mind and agreeing what really matters when it comes to leadership. At the end of the workshop one of the senior managers said: "We did this in an hour. If it was the Management Team, we'd have taken three days!"

On the basis that, "What gets measured, gets done", we used the Group to determine the most important Critical Success Factors, and how they could measure these on a monthly basis to gauge whether or not they are improving. They also agreed how they could communicate these most visibly and what they would do for corrective action. This session was lead by our measurement expert David Parmenter.

When people left to go home they were 10 feet taller than when they arrived. But don't believe me, read what the manager in charge said, see the quote at the top of this page.

This product has been developed and is supported by Bruce Holland with help where required from other members of the Virtual Group Business Consultants.

All work undertaken by Bruce Holland is guaranteed. If at the end of the program the client doesn't feel that they have received value for money, they may adjust the bill and pay an amount equal to the value they feel they received.

Facilitation is a core skill, it's what I'm good at, if you'd like to know more, give me a call.