Back to the Back to Favourite Managers...

Pat Waite's gift to the Next Generation of New Zealand Leaders 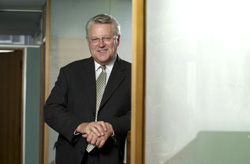 Pat Waite, is the Chief Executive of Public Trust and the immediate Past President of the Institute of Chartered Accountants.

I first met Pat when he was Head of BNZ Australia and I was BNZ's Group Strategic Planning Manager. Since those days he has held senior roles in Trust Bank and Westpac. I have always admired the way Pat operates and I hope that his example will inspire someone else to follow his lead.

The lesson Pat wants to share is not to overlook the power of people swinging behind your vision. "It's amazing! It's inspiring! And it can be seen by the tangible results we are achieving." he says.

Pat and most of his management team were new to the industry and they had to overcome suspicion from staff who had had three C.E.O.s in three years and as many changes in direction. He said he had their respect but had to work to gain their trust and credibility. Some of the things he did were:

Pat has stayed in the job. He is now into his third year as C.E.O. and staff are starting to understand that he won't walk away.

Pat identified 70 key leaders (both formal and informal) in the organisation. He brings them together to work with him for 4 days each year helping them understand his vision of leadership (far more inclusive than they had been used to) and the importance of people - "Being with them is the strongest way to role-model leadership". Each time he meets them he gives them a new tool for their toolkit and the authority to go back and use it.

Pat monitors customer complaints and rings up staff to find out what's happened. "Everyone knows that I think customers are important and they are much more focused on customers".

Pat has developed a one page plan of the future and he has made it his personal mission to help every person in Public Trust understand it. He says: "They are starting to dream what's possible and believe it".

Pat spends a month a year travelling the customer centres sharing the vision. He has been to each customer centre at least three times. "Even if there's only one person in the office I sit down and talk to them for an hour and a half. It's critical for alignment, everyone's getting the same message and they are hearing it directly from me. "

He has encouraged the freedom for people to challenge and offer suggestions. Pat says "Within the company there are lots of ideas, gems and experiences that are extremely valuable.". He went out and asked people what they would do to increase revenue growth. Pat saids he got all sorts of ideas for new ways of working and new products that simply would not have existed Pat has tried to add value to people in both their business life and their personal life by what he calls: "Touching people. You have to look them in the eye and shake their hand". He says: "It's all about growing confidence. Now I see staff working with customers with pride".

If I was to summarise Pat's magic, it comes in his own words: "I just know that if we do the right things we'll get the right results. I've chosen to spend my time with them. And that to me is one of the most powerful things I can do as a leader."

Interviewed in 2005 by B Holland